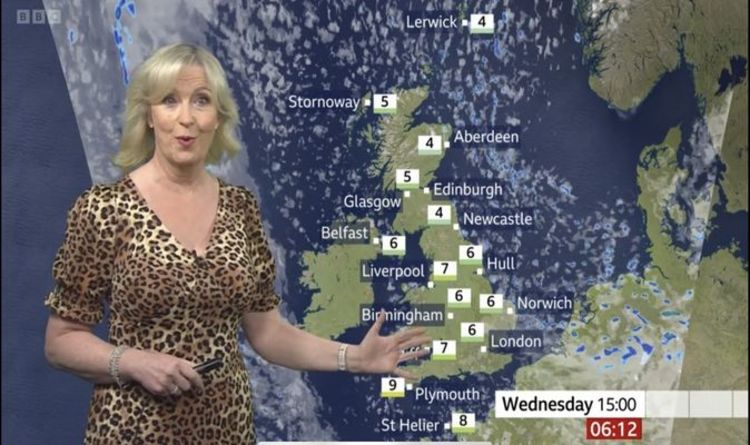 Weather warnings were issued by the Met Office on Wednesday, with two yellow warnings for ice and snow. Carol Kirkwood of BBC Weather has told Britons to prepare for lower temperatures and arctic explosions as patches of ice and snow dust spread across the country. Ms Kirkwood also predicted that northern Scotland, Birmingham and Northern Ireland are expected to see up to 3cm of snow over the next few days.

Ms Kirkwood said: ‘This morning it’s a cold start to the day if you haven’t been out yet it’s freezing around.

“And also the risk of ice on untreated surfaces. As we go through the day, a ridge of high pressure will pass through us.

“After a windy start the winds will slowly subside, the winter showers, many of which will wear off, and we will see long periods of sunshine.

“So there is a risk of ice this morning in Scotland and Northern Ireland, where we had showers overnight in the North West of England.”

The BBC weather forecaster continued: “Heading to Wales and also the North West Midlands, but as this ridge develops the winter showers in the east will subside.

“Although there are still some and some migrate inland during the day.

“And there will be a few more across the West, but many of us will have a dry, cold day too.

“Temperatures of four in the north to about nine in the southwest and again tonight and tonight you can see a lot of clear skies.”

She also warned that “with the exposure and maybe across Northern Ireland the start of the day is so cold and freezing”.

Ms Kirkwood added: “Before all of this rain accumulates there will be snow even at lower levels for some.

The British have also been warned by the Met Office to expect widespread delays on roads due to long stretches of ice which will likely cause travel delays and disruption across the UK.