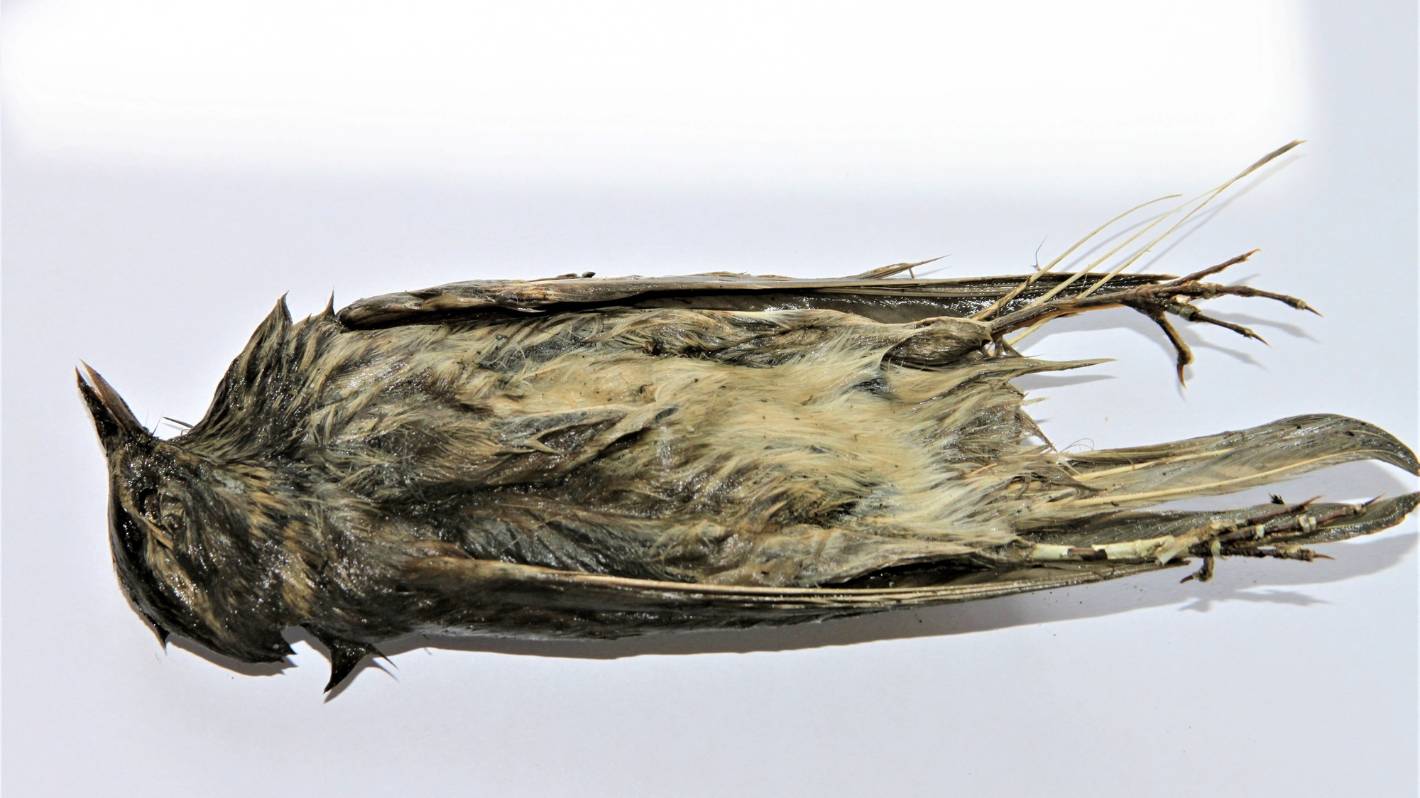 Climate change is melting treasures in the glaciers of the northern hemisphere. What taonga could emerge from New Zealand glaciers? WILL HARVIE reports.

The first ski was discovered in 2014. Found near the Digervarden ice patch in Norway, it was 1300 years old and predated the rise of Viking culture. The researchers kept an eye on the spot, hoping that another would emerge.

Last summer in the northern hemisphere, when satellite imagery showed the ice had receded even further, the research team sent an archaeologist to look again.

Indeed, a second ski was found in September about 5 meters from the first, and deeper in the ice. Both were carved from wood and not identical like modern skis. But their bindings were the same and they were declared pairs – “the best-preserved pair of prehistoric skis in the world”.

Welcome to the world of glacial archeology, a new field made possible by climate change.

Ice is an excellent preservative, and more than 3,500 artifacts – including arrows, darts, capes, shoes, traps, snares, canes and ancient human remains – have been found in recent years, as documented on the Ice Secrets Site led by scientists based in Norway.

Seeing these amazing finds from afar raises the question of what could be melting New Zealand’s glaciers and ice sheets due to climate change.

Since New Zealand does not have appreciable permafrost, we won’t see people like woolly mammoths and cave lionswhich were discovered in Siberia. But we have glaciers.

To speculate on what is most likely to emerge, it helps to delve into the history of Aotearoa.

Archaeological and genetic records show Polynesian sailors arrived on this archipelago around 1280.

Archaeologist Ngāi Tahu Atholl Anderson and others have said this was largely supported by Maori oral traditions.

British captain James Cook first reached these islands in 1769. So there are about 500 years of pre-European occupation. That’s not long by archaeological standards for northern hemisphere glaciers.

Birds, on the other hand, have lived on Zealandia – the continent that is now hidden under New Zealand and the surrounding Pacific – for millions of years. Today’s ice is nowhere near as old.

A useful starting point is probably the last ice age, which began 2.6 million years ago and lasted until about 11,000 to 15,000 years ago. It was probably not a steady retreat, and glaciers and ice patches grew and retreated with the seasons and other fluctuations.

Birds have been found in the glacial ice. A 4,200-year-old red-winged thrush was recovered from a patch of ice in the Oppdal Mountains in central Norway in 2017.

It is “very well preserved … [and] It looked like he had died yesterday, “wrote Dr Jørgen Rosvold, deputy research director on terrestrial biodiversity at the Norwegian Institute for Nature Research, in an email.

“We opened him up and he even had all of his internal organs still relatively intact.”

Frozen birds also came out of mountain ice in the Yukon, northwestern Canada.

During warm years, the ice sheets and glaciers in Scandinavia and North America are “littered with many mummies of small birds and rodentsSays Secrets of the Ice.

At the Grasshopper Glacier in the US state of Montana, swarms of grasshopper mummies were found buried.

It is therefore possible that birds may emerge from the New Zealand ice sheets. Some might even disappear.

There are 62 extinct birds listed in the December 2021 of the Department of Conservation Bird conservation status report.

Highland moa had long, thin toes that “might have been adapted for walking in snow,” according to the NZ Birds Online website. Could we succumb to the cold, freeze quickly and then lock ourselves in the ice?

What about turn it off South Island Piopio, which was abundant from sea level to the alpine zone of the west coast until the 1880s?

“There is potential”, says Nic Rawlence, paleogeneticist from the University of Otago. “Not as big as in the northern hemisphere, but potential.”

According to Secrets of the Ice, archaeologists typically don’t find objects in the glaciers themselves. “Large slippery glaciers that cut their way along rocky slopes [are] not good for the survival of fragile artefacts ”, it says.

The crevasses sometimes give way to the remains of modern climbers or their equipment, but they have not yet stripped of artefacts of interest to historians.

On the contrary, most of the discoveries come from patches of ice, which are located next to the main glaciers. Patches of ice do not move, or move very slowly, and persist for thousands of years.

These days they are melting.

Ötzi the Ice Man was found in a patch of ice near a glacier on the Italian-Austrian border in 1991.

At over 5,000 years old, it predates the Egyptian pyramids and Stonehenge. Ötzi’s equipment and body continue to fascinate the public and scientists, in part because an arrowhead was found lodged in his shoulder.

Italy made Ötzi a tourist attraction and built a museum in Bolzano, South Tyrol, around it. It is even exhibited in a “specially designed cold cell visible through a small window”.

In Canada, Kwäday Dän Tsʼìnchi, which means “person found long ago”, was discovered in a patch of ice by hunters. He was determined to be 18 or 19 and lived between 1720 and 1853.

Kwäday Dän Tsʼìnchi was a coastal resident near the BC-Yukon border and had traveled at high altitudes in the days leading up to his death.

Genetic testing showed that he had living relatives among the Champagne and Aishihik First Nations who still reside in the area.

Members of his tribe helped remove Kwäday Dän Tsʼìnchi from the ice and were involved throughout the investigation. He was cremated according to local custom and his ashes buried near the place of his death.

Ngāi Tahu in the Southern Alps

In his book Uprising, author Ngāi Tahu, Nic Low, recounts his wanderers and journeys through Kā Tiritiri-o-te-moana, the Southern Alps, following the routes taken by his ancestors.

It shows that pre-European Maori had the equipment, skills and curiosity to access alpine areas where patches of ice are found.

“No one I’ve read or spoken to has suggested that high mountain travel is a regular occurrence,” writes Low. “But I could believe that on rare occasions groups had crossed these alpine passes.”

Maori tools were found near Godley Hut on the road to Sealy Pass, about 25 kilometers northeast of Aoraki / Mt Cook.

The ancestors of the Ngāi Tahu were “sailors from Eastern Polynesia when they arrived, but their new mountain home made them Maori,” Low writes.

It is possible that the Maori lost property during these ice visits, just as those old Norwegians lost their equipment, and that some of these items were kept in the ice of Aotearoa, and they could be found in the future.

An anonymous curator at a New Zealand museum scoffed at the idea. They declined to be cited, but said, in essence, the odds were extremely low.

The Secrets of the Ice team is more optimistic. They attempted to generate interest at an academic conference a few years ago, apparently without success.

Nic Rawlence of the University of Otago speculated that the melting ice could reveal a cave with bird remains inside. New Zealand birds were recently found in caves at lower elevations, and a rock shelter recently abandoned 6,800-year-old moa droppings.

If you find something …

Get photos and a GPS location, advises paleogeneticist Nic Rawlence.

Try not to disturb the artifact or the surrounding area.

If human remains are found, the police will have to intervene.

If the find is likely pre-European, iwi’s involvement is appropriate.

Research by the Secrets of the Ice team found that frozen artifacts deteriorate quickly when exposed to air, wind, rain, and sun. It is advisable to make contact quickly.