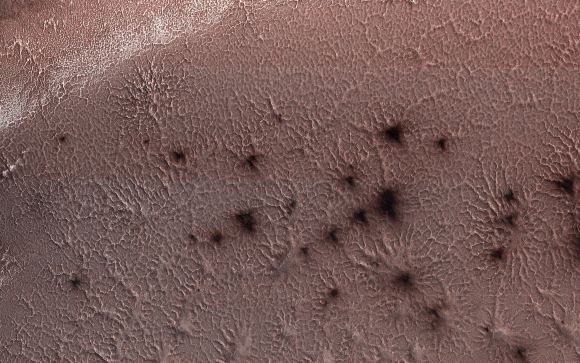 Like Earth, Mars experiences climatic variations over the course of a year due to the tilted nature of its orbit (i.e. seasonal changes). Likewise, these temperature variations result in an interaction between the atmosphere and the polar caps. On Earth, seasonal variations in temperature and precipitation cause the polar ice cap to grow in one hemisphere while the ice cap in the other hemisphere shrinks.

On Mars, however, things work a little differently. In addition to the snow that rains on the polar caps during the winter, the Martian polar caps also receive a large amount of frozen carbon dioxide (“dry ice”) in addition to snow. Recently, an international team of scientists used data from NASA’s Mars Global Surveyor (MGS) mission to measure the growth and retreat of the planet’s polar ice caps. Their results could provide new information on how the Martian climate varies due to seasonal changes.

The study that describes their findings was led by Haifeng Xiao, a research assistant at the Institute of Geodesy and Geoinformation at the Technical University of Berlin. He was joined by researchers from Stanford University, Paris-Saclay University, the Institut universitaire de France and the Planetary Research Institute and the Institute of Atmospheric Physics of the German Aerospace Center ( DLR).

What we know about the Martian polar caps indicates that they are made up of three parts. First, there is the residual (or permanent) ice cap, which consists of patches of water ice several meters thick at the North Pole and an 8 meter (~ 10 feet) layer of water. thick frozen carbon dioxide at the South Pole. Underneath are the Layered Polar Deposits (PLDs), which are 2-3 km (mi) thick and are composed of water ice and dust.

The last is the seasonal ice cap, a layer of frozen CO2 deposited on top of permanent ice caps every winter. For the sake of their study, Haifeng and his colleagues focused on seasonal ice caps to reveal how they are affected by seasonal variations in temperature and solar radiation, and how this is associated with annual variations in the climate of Mars. As Haifeng told Universe Today via email:

“Each Martian year, about 30% of the CO in the atmosphere2 the mass is in lively exchange with the polar surfaces through the seasonal deposition / sublimation. Temporal variations in snow / ice levels and volumes associated with this process can place critical stresses on the Mars climate system and volatile circulation patterns.

In a Martian year, which lasts more than 687 Earth days (or 668.5 sols), seasonal changes cause atmospheric carbon dioxide to migrate from the North Pole to the South Pole (and vice versa). These seasonal actions are responsible for transporting large amounts of dust and water vapor, resulting in frost and the formation of large cirrus clouds visible from space.

This process of sublimation and interchange between the poles is also responsible for notable geological features on Mars, such as the araneiform terrain (aka “spiders”) near the South Pole and the way the dune fields in the northern planes fit together. dig with the arrival of seasonal workers. As Haifeng explained, understanding the relationship between seasonal polar caps and the formation of geological features on Mars could lead to a better understanding of the Martian environment.

Over the past two decades, measurements of polar ice caps have been made using a variety of methods – gravity variation, neutron and gamma ray fluxes – and modeled on the basis of general circulation and balance models. energetic. For their study, Haifeng and colleagues relied on data obtained by the Mars Orbiter Laser Altimeter (MOLA) instrument aboard the MGS to obtain precise measurements of the height and volume of Mars’ polar ice caps over the course of the time.

This involved reprocessing the MOLA Precision Experiment Data (PEDR) records – or individual MOLA altimeter readings – using the latest available MGS orbit data and the rotation model of Mars. They then self-recorded these profiles in a coherent digital elevation model (DEM), which served as a static mean area measurement for Mars. As Haifeng explained:

“We proposed and validated the co-registration of local dynamic profile segments from the Mars Orbiter Laser Altimeter (MOLA) to Static Digital Terrain Models (DEM) as an approach to obtain seasonal CO.2 variations in the depth of the ice cover on Mars. In addition, we have also proposed a post-correction procedure based on pseudo-crossing of MOLA profiles to further improve the accuracy of the depth variation time series. “

This resulted in a series of height change measurements with an accuracy of approximately 4.9 cm (1.93 inch) and peak-to-peak height variations of approximately 2.2 m (7.2 ft). . The team has also extended these findings to the entire South Pole, which they hope to cover in more detail in another study soon to be published. Haifeng and his colleagues also plan to compare their results with radar altimeter data obtained by the SHallow RADar (SHARAD) sounder aboard NASA’s Mars Reconnaissance Orbiter (MRO).

“In the next step, we will try out the SHARAD radar altimetry to validate MOLA measurements and derive the long-term seasonal pattern of the depth of the seasonal polar caps of Mars, which will also be important to assess long-term stability. underlying Martian residual polar caps, especially the residual southern polar cap which is considered to be in a near stable state, ”said Haifeng.

These measurements will allow planetologists to learn much more about the Martian climate and the annual changes it undergoes. They will also help prepare for future robotic and human exploration missions to the Red Planet, which are still expected for some time over the next decade.

Image: Layered deposits at the south pole of Mars