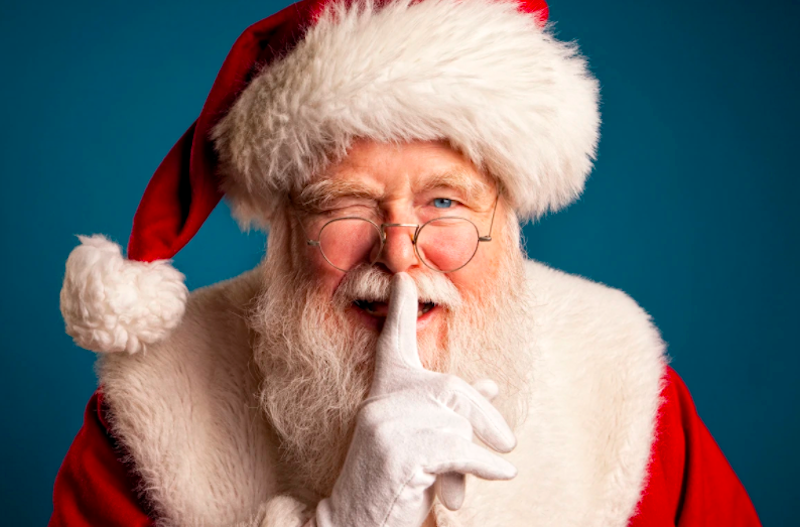 On Connections: Love it or hate it, the story is a map. Those who hate history think it doesn’t matter; many who love history think it is an escape. In truth, history is the clearest road map for how we got here: America in the 21st century.

The tree and the cheerful man in the soot-encrusted, fur-lined red costume are pictures of Christmas. The question is: when and where did they first appear?

Some argue that any origin story of Santa Claus must begin with a Greek born in the third century. Nicholas of Patara (formerly Greece, now Turkey) was a devout Christian born to wealthy parents. Nicholas dedicated his life to Jesus’ saying: “Sell what you have and give the money to the poor, and you will have treasure in heaven.” Nicolas helped the needy, the sick and the suffering. He died a bishop and was subsequently made a saint. Saint Nicholas was imprisoned and persecuted by the Romans. It’s a laudable story, but not a festive one.

There was the happiest Santa Claus in England as early as the 1500s. He was a tall man in scarlet robes lined with fur and full of good humor, food and wine. (Think of the ghost of the Christmas present in Charles Dickens’ “A Christmas Carol.”) However, this is where the similarities end. He had no relationship with children or gifts, no sleds, and no familiarity with fireplaces. He was the symbol of the rejoicings of adults – Bacchus or Dionysus in a red robe.

Our Father Christmas, the snowman who makes a list and flies on Christmas Eve to deliver gifts to worthy children, was a 19th century invention. It was introduced along with other things we take for granted: the Christmas tree, the stockings “hanging neatly over the fireplace” and those “eight little reindeer”. Our vision of Christmas and its symbols belongs to the inventiveness of the 19th century.

A small volume, “For Little Ones Five to Twelve” was published in 1821. It contained a poem entitled “Old Santeclaus with Much Delight”. The unknown author described a reindeer sleigh and a happy little man bringing gifts to the children. He read, in part:

“Old Santeclaus with great pleasure
His reindeer lead this freezing night,
O’r chimneys, and snow tracks,
To bring you his annual gifts.

Two years later, “A Visit From St. Nicholas” (better known today as “The Night Before Christmas”) was published in the Troy Sentinel. It appeared on December 23, 1823 and soon after Old Santeclaus was attributed to Clement Clarke Moore.

In two poems, Moore invented our modern Santa Claus. He attributed all his modern attributes to the old man: Santa Claus rode in a sleigh that landed on the rooftops, he entered through the fireplace with a sack full of toys, had gifts for the nice children, and a short time to the villains. Santa Claus was “a good old cheerful elf” with “a little round belly” who “shook when he laughed like a bowl full of jelly”. His eight little reindeer were Dasher, Dancer, Prancer, Vixen, Comet, Cupid, Dunder and Blixem. Later, through a series of changes and deliberate misspellings, the last two names changed to Donner and Blixen.

In 1853, stockings hung on the fireplace and Santa Claus was a regular prop, but his name varied. In a magazine article, he was described as a “fabulous character” called alternately Kris Kringle, Saint Nicholas or Father Christmas. Exactly when Santa Claus went from a round-bellied elf to a tall, stout person is less certain, but an illustration by Thomas Nast from January 3, 1863, Harper’s Bazaar depicts Santa Claus in the way that would be reproduced in from that day. .

Santa’s address wasn’t set until 1866. Again, Nast gets credit for this anecdote as well. In Harper’s Bazaar on December 29, 1866, Nast’s illustration has a caption: “Santa Claussville, NP [North Pole]. “In 1869, another illustration by Nast, Santa Claus and His Works, accompanies a text by George P. Webster. Webster’s text clearly translates the preceding” NP. “It reads:” The house of Santa Claus is near the North Pole, in ice and snow. “

In 1870, the guy in the red suit who lived at the North Pole was a well-accepted part of the Christmas story. And everyone had memorized the lines:

Christmas as we know it – trees and wreaths, Christmas bells and carols, gifts and good food – is as much a product of Stockbridge, Massachusetts, as anywhere else. The authors of the modern celebration were residents of Stockbridge: an old maid named Catharine Sedgwick, a German immigrant named Charles Follen, and an artist named Norman Rockwell.

In novels and stories, Catherine drew the original and indelible image of children with rosy cheeks, their eyes shining with happiness on Christmas morning. Catharine borrowed from her experience of New York Christmases and New Years celebrations in Stockbridge. You see, in Massachusetts, New Years’ Day was the holiday that included parties, food, gifts, and children’s games. Christmas was not celebrated.

In Massachusetts, the celebration of Christmas was banned. Caroling has been associated with extortion and partying with uncivilized behavior. Sedgwick, the most popular American author of her day, transformed the Christmas image from an adult festive image into one of innocent childish joy. In 1856, Christmas became a legal holiday in Massachusetts.

Follen and his wife Eliza delighted their guests with a Christmas tree. For the benefit of his 2-year-old son, Follen recreated the German Christmas of his childhood. He picked out a tree in the woods, cut it down, and put it in a tub of water. There he hung small dolls, golden eggshells and paper cornucopias filled with candied fruit. It was lit by candles.

One guest described it: “It was really beautiful; the room appeared to be in flames, and the ornaments hung so well that no accidents happened except that a doll petticoat caught fire. Clever Follen placed a damp sponge attached to a stick nearby to put out any potential fire “and no harm resulted.”

When the children “came in … every voice was muffled … all eyes were wide … all steps stopped.”

Follen’s was not the first Christmas tree in America or the world, but it was, as far as we know, the first in Massachusetts. Did he light the candles first in Stockbridge, Lexington or Boston? It’s not certain, but suffice it to say that he wrote about the tree and his zest for living in Stockbridge with “so many good friends” almost in one breath.

One hundred years later, in his iconic “Main Street at Christmas” image, Norman Rockwell captured the images and feelings of a New England Christmas.

Thanks to three residents, Massachusetts played a central role in creating the modern American Christmas. To each of you, may your vacations be joyous and bright, filled with all that we now associate with vacations.