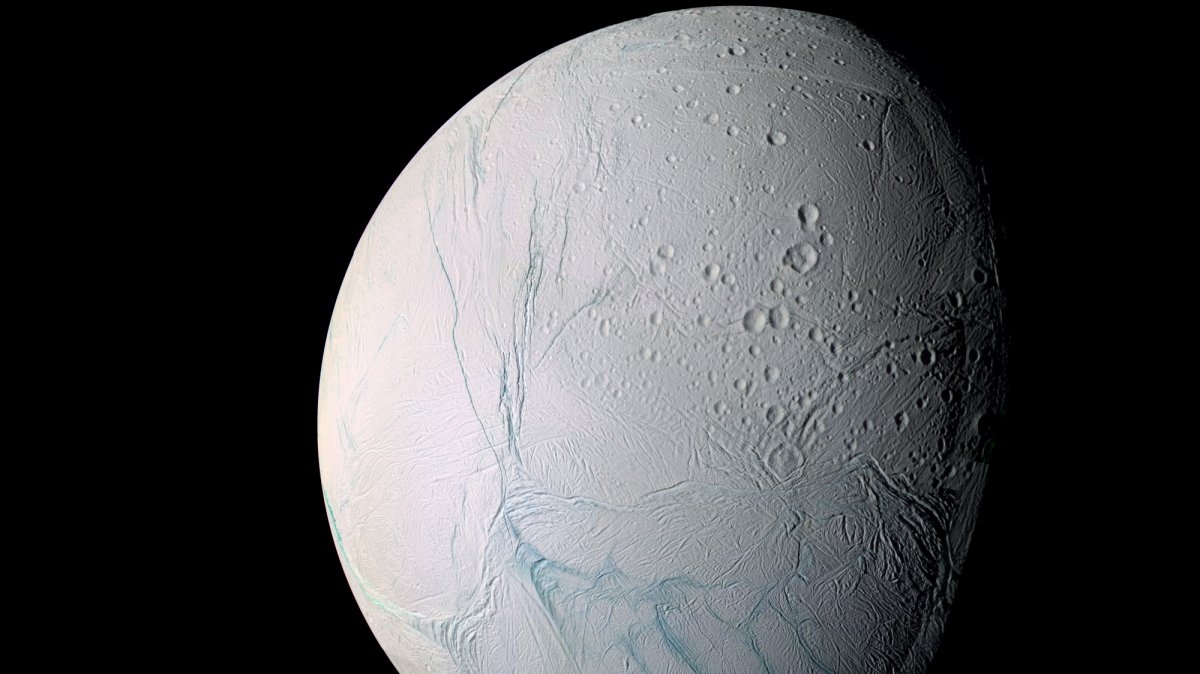 A few weeks ago, French astrobiologists Antonin Affholder and Régis Ferrière from the Paris Sciences et Lettres Research University generated tremendous media coverage with a publication in the journal Nature Astronomy. After all, these were possible traces of alien life on Saturn’s ice moon Enceladus. But have scientists really found evidence for the existence of extraterrestrials?

The ice moons of the gas giants Jupiter and Saturn are currently the most promising candidates for alien life in our solar system. Of particular interest is Saturn’s moon Enceladus: NASA’s Cassini space probe has discovered eruptions of water at the south pole of the ice moon. Through the cracks in the ice – the so-called “tiger stripes” – huge fountains of ice and steam flow into the atmosphere of the little moon. Beneath the icy surface, there is apparently a liquid alien ocean full of fascinating elements and connections as well as sufficient energy.

The space probe then flew over these fountains in 2015 during several orbits around the Moon and the Cosmic Dust Sampler (CDA) developed in Germany was able to analyze the composition with its mass spectrometer. The collected “dust” particles then turned out to be grains of ice with an unusual composition. Overall, Cassini and CDA found a relatively high concentration of hydrogen in the form of ice, vapor and liquid water. In addition, there was methane, carbon dioxide and a whole range of salts, including sodium chloride – our earthly table salt. The discovery of silicon compounds, which must have originated from the solid rocky core of the moon, was also unusual. The most likely explanation for fountains and their makeup right now is the hydrothermal systems at the bottom of the ocean, as they also exist on Earth.

Enceladus is completely icy – up to 35 kilometers thick at the equator and less than 5 kilometers at the South Pole. A global ocean stretches between the ice and the solid core, the bottom of which lies about 70 kilometers below the surface. Due to the large temperature gradient in the ocean and at the boundary layer of the ice surface, strong thermal upheavals are likely to occur. The silicon particles are probably generated by hydrothermal activity above 90 ° C in the porous rocky core of the moon, then move closer to the surface due to thermal upheaval and are ultimately rejected by the fountains.

The discovery of methane had transformed the small ice moon with a diameter of only 500 kilometers from an uninspiring ball of ice to one of the hottest candidates for astrobiological exploration in our solar system! Methane is so interesting for the search for extraterrestrial life because it can arise on earth through both non-biological and biological processes. The crucial question now is: was the methane in the Enceladus Ocean produced by living things or was it abiotic?

How to explore a distant alien ocean?

Direct exploration of such a habitat deep below the surface of another celestial body will likely be impossible in the decades to come, says lead author of this study, Antonin Affholder. This is why he and his colleagues tried a mathematical method here: Bayesian statistics. “We built mathematical models for the explanation of the Cassini data in order to quantify the probability of the different explanatory approaches.”

The researchers therefore examined which of the methane formations could best explain the Cassini data and developed a geophysical model from them. On this basis, they then calculated the probability for the two hypotheses retained, one via life forms and the other without. The production of abiotic methane takes place in the terrestrial oceans under high pressures and temperatures in greenish rocks containing water in particular by what is called serpentinization, for example at the level of hydrothermal vents. However, only to a small extent and slowly, according to Affholder. Much more and more quickly, the microorganisms produce the colorless gas in a process called methanogenesis.

The quantity of methane measured by Cassini cannot be explained by the abiotic formation of methane and is therefore the less probable of the two hypotheses. “Are we to conclude that microbes similar to Earth inhabit the depths of the Enceladus Ocean?” Absolutely not, although that would be fascinating “says Affholder. On the contrary, our study tells another story, namely that of a negative result!”

Answers only on site

The aim was to test the plausibility of different hypotheses. Rejecting the less probable hypothesis does not mean that the other explanation, which is a little less unlikely, must then automatically be correct. On the contrary, the facts are simply not sufficient at the moment to answer the question of a possible life in the Enceladus Ocean. It therefore remains the task of future ice moon missions to continue research on the still unknown sources of methane and to discover their origin. Bayesian statistics have in any case proved their worth as a model of weighting of probabilities in the search for traces of extraterrestrial life.

The researchers therefore do not believe in any way in methane-producing aliens in the orbit of Saturn, but rather that the available data is not yet sufficient for a plausible justification. Even though it is a rather dry mathematical work, the subject of the search for life out of the earth has once again thrilled the media and the public. Traces of methane on Mars continue to make headlines for the same reason. Even though, as in the current ESA announcement, only the traces of methane measured by the Trace Gas Orbiter are lower than initially assumed.

Kennedy: Marketing the moon will open up opportunities | Chroniclers

Is Antarctica a country? The future of the world’s least understood continent