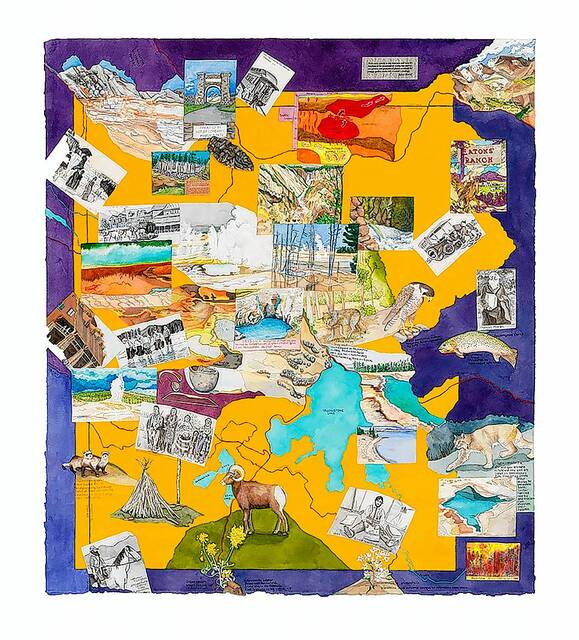 Illinois has a national historic site and a national monument, but no national parks.

But the Art Association of Jacksonville will offer a glimpse of a few national parks starting Saturday, when Chicago-area artist Beth Shadur presents her National Park Project exhibit at the David Strawn Art Gallery.

The nature and effects of climate change have long been central to Shadur’s work.

“I’ve always done problem-oriented work,” she said, noting the “Secret Garden” series she started in the late 1980s. The paintings, inspired by scientific studies that have revealed that plants were growing at a rate seven times faster than normal around the site following the Chernobyl nuclear accident in April 1986, represent buildings overwhelmed by plant growth.

“Who will win here? Shadur asked. “Man or nature? I did a whole series of works in which the plants were sort of invasive buildings.

She also did paintings that were “a kind of prayers for peace,” she said, but “went back to the environment.”

“I love nature, I love animals,” she said. “I spend a lot of time hiking, in nature. It’s one of my favorite things to do. It seems like a very important thing to focus on.

To this end, she spent several weeks as an artist in residence at a museum in Hafnarfjordur, Iceland, where her concerns about the fragility of the environment were heightened by the nation’s mix of volcanoes and icebergs. islander.

She also completed an artist residency in Banff National Park in Alberta, Canada.

If you are going to …

The Art Association of Jacksonville will host an opening reception for “The National Park Project” by Beth Shadur on Saturday from 6 to 8 p.m. at the David Strawn Gallery, 331 W. College Ave. Shadur will give a talk at 6.30 p.m. Admission is free.

“I look at the origins of the land and how it is considered sacred by the indigenous peoples and how this land was taken,” Shadur said. “The impact of that and the impact of the settlers, the way the land was used, driven out, whatever.”

Shadur has now focused on America’s national parks and the effects of climate change on these natural environments.

His National Park Project series is funded in part by an artist grant from the Illinois Arts Council Agency. The works vary in size, typically with a large piece placed on a map of a particular park and combining watercolor with mixed media, collage, and text. Matching smaller pieces provide details on larger pieces. While not photorealistic, they’re all based on photos she took on a hike.

“These are beautiful surroundings which I hope will give people an appreciation for these places,” Shadur said.

The Strawn exhibition will feature around 40 pieces, with seven or eight large works and the other “small; very small intimate watercolors, ”she said.

The series “grows because I keep doing plays,” she said.

Shadur hopes his works will inspire others to consider the fragility of nature and appreciate the environment.

“I really enjoyed some of the land formations,” she said of the parks she visited. “Yellowstone (the national park) is so amazing you couldn’t believe what you were seeing. (Art) looks like an abstraction, but it’s really what there is in nature. It is obviously interpretative, but… ”

Shadur doesn’t just see the beauty of nature, however.

“I do things where I think about beauty,” she said. “But, at the same time, there is an element that disturbs because it is threatened. It is the idea of ​​the fragility of life. I lost both of my parents quite recently, I lost a sister. … When you observe nature, I am always aware of its fragility. Powerful and fragile.

Shadur hopes his art captures glimpses of nature, but she doesn’t think she’ll ever do it justice.

“No matter how wonderful art is, it is never as good as nature,” she said. “The things that you see (in nature) that are so amazing, you can’t really fully capture them. It’s such a multidimensional experience.

“If I can give something that makes people think, that’s important to me. But I would never be able to fully grasp how amazing these things are. “