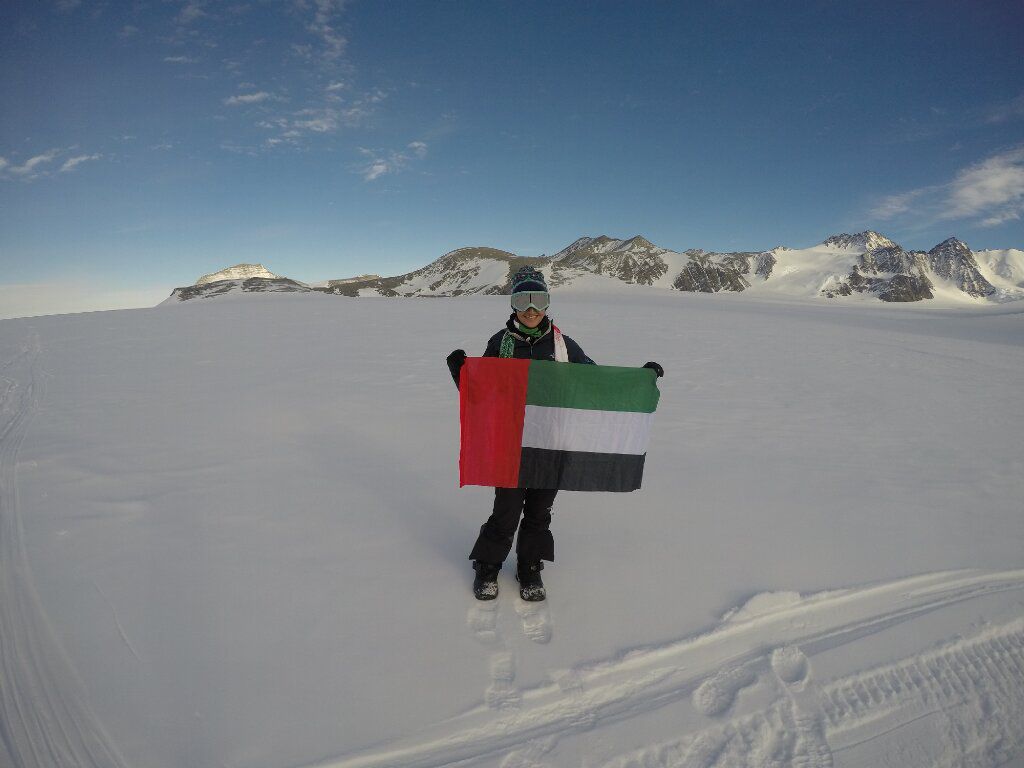 A group of intrepid Emirati explorers are no longer poles apart after meeting to discuss their epic adventures and highlight the threat of climate change even in the most remote parts of the world.

The UAE Polar Network consists of 35 UAE citizens – 19 men and 16 women – who have visited one or both of the North and South Poles.

The Abu Dhabi Environment Agency (EAD) invited them to a special event at Expo 2020 Dubai to mark Antarctica Day on Wednesday.

The annual occasion celebrates the anniversary of the signing of the Antarctic Treaty in 1959 to protect the continent.

The event – the lights of Zayed – was narrated by several explorers who set foot in the Arctic, where the North Pole is located, and Antarctica, site of the South Pole.

Members of the network include Ameera Al Marzooqi, 29, the first Emirati woman to visit the heart of Antarctica.

She has visited the continent twice, the most recent in 2016, when she accompanied Sir Robert Swan, who was the first person in history to travel to the North and South Poles, to visit Union Glacier and test the renewable technologies, including solar lights.

The chilling effect of climate change

She said she saw the effects of climate change with her own eyes on her travels, including plastic waste.

Ms Al Marzooqi plans to return to Antarctica in March with Sir Robert to film a documentary and raise awareness of the environmental issues facing the continent. She said she was currently looking for a film crew to join her.

“We have seen plastic in Antarctica and in the Arctic as well. It shows how big a problem plastic waste is. It’s everywhere, she said.

“We need immediate action. People don’t realize how important it is to protect Antarctica. It will affect us all, the melting of Antarctica, the ice will raise the sea water level and affect us all. “

EAD organized its own expedition to the continent in 2018, when Team Zayed lit up the Antarctic sky with 100 solar lights. He then released a documentary based on the two-week trip.

“People say that the mandate of the Abu Dhabi Environment Agency is only that of Abu Dhabi,” said Ahmed Al Hashmi, interim executive director of biodiversity at EAD.

“However, we always say that the impact of EAD is not just at the local, national or regional level. It is also international. We believe that environmental issues are shared by all. There is no border between countries, physically. We share the same land, water and air.

He said the EAD delegations also visited the North Pole.

“And we send them environmental messages. So when we participate in Antarctica, we send our people to get more of the international group that participated during this mission and to focus on the main issues, climate change and global warming. The impact is clearly there, ”Al Hashmi said.

“When they returned, they delivered this message to the public.”

Winston Cowie, head of maritime policy at EAD, said the idea was to bring together all the explorers from the United Arab Emirates who had visited the poles to mark Antarctica Day.

“We did some research and found out that there were about 35 people who went to these far away places and did some amazing things from environmental remediation work to electrical engineering, by the way. by installing solar panels in a research base, some really cool stuff.

“So for Antarctica Day, we wanted to bring everyone who’s been there and have an event at the Expo and send another message to the world to shine the spotlight on climate change, especially with the Cop28 in to come. “

About half of the members of the UAE Polar Network attended the event, including delegations that visited the continent in the 1990s.