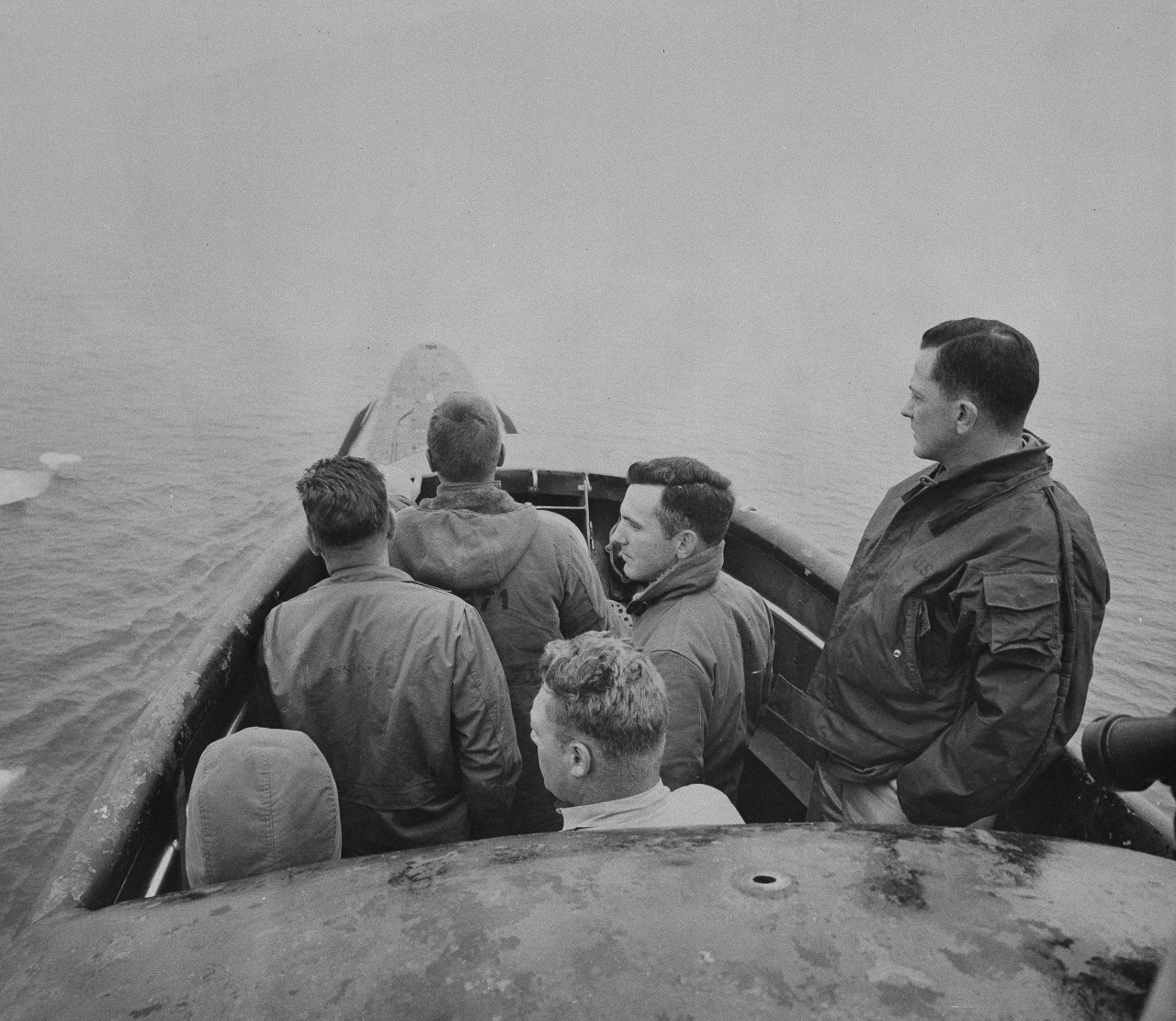 On July 23, 1958, the world’s first nuclear submarine, the USS Nautilus, leaves Pearl Harbor, Hawaii, and sails north. On board are Commander William R. Anderson, 111 officers and crew, and four civilian scientists. His top secret mission goes to the North Pole and beyond.

Due to its nuclear power plant, Nautilus does not need to surface to recharge batteries, like diesel-electric submarines from WWII and before. They will be able to travel all the way under the submerged Arctic ice cap.

But first, they have to get under the ice. It is in fact the Nautilus second test of the crew. An earlier attempt in June had to be cleaned up when they discovered the pack ice near the Bering Sea was much thicker than expected. After a painful incident where they have to squeeze under a huge iceberg with only five feet to lose, they head south to Hawaii and wait for the ice to clear.

Upon their return to the region in late July, the pack ice retreated north. On August 1, they dive near Point Barrow, Alaska, and head for the Pole.

Navigating a ship in the Arctic presents unique challenges. The needles of magnetic compasses begin to sway erratically as they approach the magnetic North Pole, and gyrocompasses, which find true north using the Earth’s rotation, can lose their lock and “tumble.” because the speed of the Earth’s rotation changes closer to the poles.

But the Nautilus has a new device, an inertial navigation system. Based on steering instruments developed for rockets, it combines a number of inputs on ship speed, course changes, and external conditions to plot a ship’s position. It’s the old concept of “esteem” taken to a new level.

At 11:15 pm Eastern Daylight Time (11:35 pm) on August 3, 1958, Captain Anderson announced to his crew: “For the United States and the United States Navy, the North Pole.” the Nautilus became the first ship to reach the Pole, whether on the surface or underwater.

On August 5, the submarine surfaced in the Greenland Sea, between Spitsbergen and Greenland. They establish radio contact and Anderson transmits a coded message: NAUTILUS 90 NORTH. (90 degrees north latitude being the location of the pole.) Two days later, the trip ends when Nautilus docks in Iceland. She has traveled 1,830 miles underwater, and her science crew’s sonar measurements have greatly expanded humanity’s knowledge of the Arctic Ocean, including the sea depth at the Pole (13,410 feet).

It has also proven that traveling from coast to coast through the Arctic is doable. In the future, this would become almost routine, at least for subs.

the Nautilus continued to serve for over 25 years, covering nearly 500,000 miles, before being decommissioned on March 3, 1980. It was designated a National Historic Landmark in 1982, and in 1986 it was on display at the Submarine Force Museum in Groton, Connecticut .

The slideshow contains photos taken by the Navy and The Associated Press in 1958 and photos taken at the Submarine Museum in 2004 by the author.

The US Navy has released a short film about the trip, narrated by Edward R. Murrow. To view, click here.