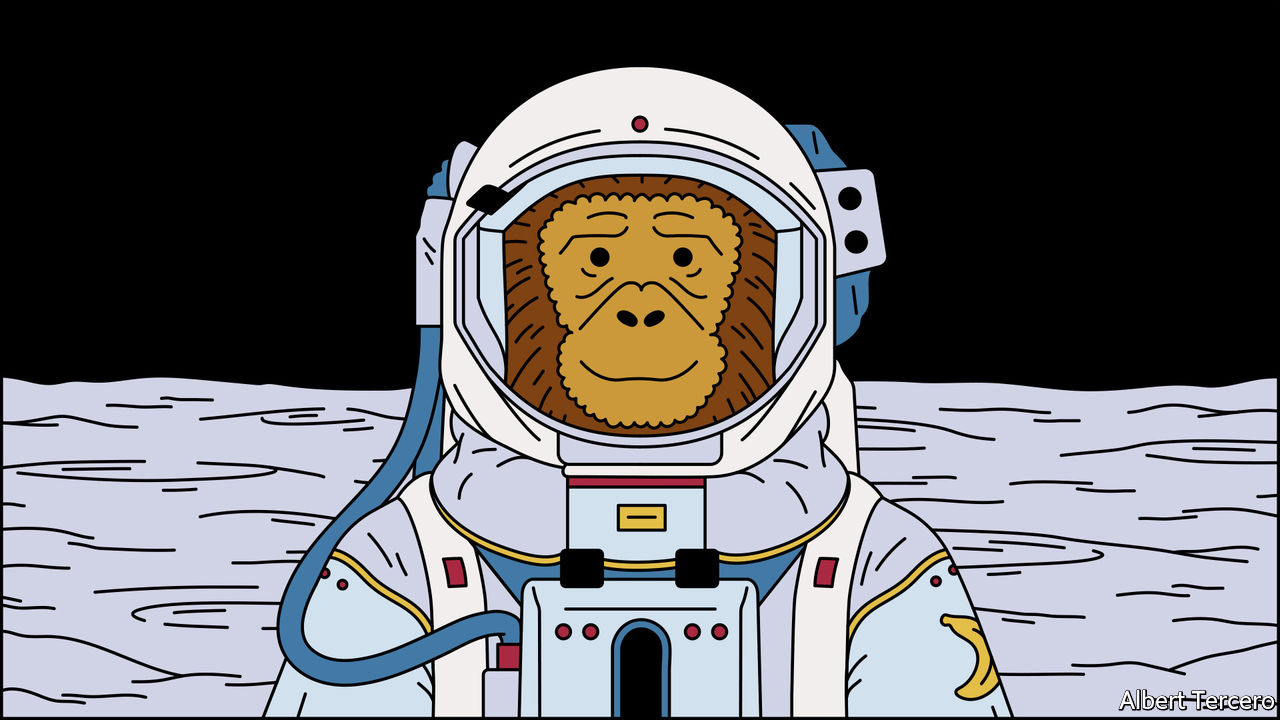 Editor’s Note: This year What if?, Our annual collection of scenarios, looks to the future of healthcare. Each of these stories is fictional, but based on historical facts, current speculation, and real science. They do not present a unified narrative but are set in different possible futures

THey can, at times, look a little sinister, their faces oddly small to their heads, their white tufts of ears protruding almost aggressively. Their ability to pounce on people from seemingly unrealistic distances can be unsettling, and their buzzing and screaming takes a long time to get used to, as does their smell. But the members of the Caird collective will not hear a word against the marmosets with whom they share their spaces at the South Pole of the Moon. As they sit in their secluded caves, sucking moon dust out of the animals’ tails, few Cairders can imagine their life on the edge of Shackleton Crater without them, and none want it. The Moon Marmosets are the first and best example of what has proven to be a fundamental fact of space flight: that the further humans move from Earth, the more they benefit from the company of other terrestrial animals.

Marmosets were originally brought to the Moon as unwitting participants in a vital research project. Marmosets are lightweight, even under terrestrial gravity, and relatively easy to care for, but they have much more human-like placentas than any other animal of their size and reasonably short gestation periods. This made them ideal for examining a fundamental question: Can humans have healthy pregnancies in the low gravity of the Moon, where things weigh only a sixth of what they do on Earth?

In the 2020s and 2030s, the years of what novelist Wil McCarthy called “Rich Man’s Heaven,” issues of obstetrics and gynecology received remarkably little attention. For many, the idea of ​​staying in space long enough for such things to count made no sense: space stations in Earth orbit and bases on the Moon were places of fixed-term employment contracts and research trips, or for tourism. Babies were no more of a problem than they were in the isolated research outposts of 20th century Antarctica.

There were, as it turns out, a few babies born in Antarctica even then, when its ice cover was almost intact. Both the Argentine and Chilean governments saw the creation of natives on the continent as a means of establishing sovereignty and organized births for this purpose. But there was no reason to think Antarctica was hostile to pregnancy and infancy. The long-term health effects of low gravity and microgravity – which for those in orbit include brittle bones, muscle wasting, and eye disease – were something else. Adults might counter some of these effects with treadmills and tension cords. But as the title of a first article on the subject puts it succinctly, “the fetus cannot exercise like an astronaut”.

Even those like Elon Musk who spoke of permanent settlements on Mars spent little time working on the issue. It was left to a small team of scientists from the Japanese modules of the Artemis base founded in 2029 by America and its allies to explore the matter experimentally using marmosets, gene splicing technology, intrauterine monitoring devices and a giant centrifuge.

They have had some success. Like human fetuses, marmoset fetuses spend most of their gestation with a density equal to that of the amniotic fluid that surrounds them, a neutral buoyancy that leaves them indifferent to local gravity; it is only relatively late that the differences due to gravity begin to appear. After a few years of trial and error, and some tricky genetic modifications to rebalance the rate at which bones grow when unstressed from use, researchers have developed a diet involving hormone treatments for them. mothers and regular sessions at the end of pregnancy in their custom. coin-sized juicer, known as a marmo-go-round. This reliably produced puppies with sufficiently strong bones and muscles and little deformity, although their tails were incredibly long, even by marmoset standards.

Sadly, in 2038 that research was cut short by the geopolitical collapse of the War of Wolves and Wimps, and then by the 26-month Great Grounding. All motorized flight in or through the Earth’s atmosphere being prohibited, the various lunar bases seemed doomed even after agreeing to pool their resources to create what has become the polynational collective James Caird. With all of the group’s biotechnological know-how focused on increasing food production and recycling nutrients, marmosets were first ignored and then released to roam the basics. Their effect on morale was instantaneous and profound.

The importance of pets to the mental health of those engaged in a homeless lifestyle was well documented in pre-war societies. It has been suggested that the effect of marmosets on the Caird collective was similar; cut off from Earth, humans were more homeless than any group of people had ever been before. Caring for, playing with, and healing marmosets also became a basis for bonding humans, many of whom did not know each other before Grounding, and some countries had been adversaries on in warfare. By the time the mysterious entity responsible for the Great Grounding finally relinquished control of Earth’s air traffic control and missile defense systems, allowing Moon traffic to resume, marmosets had become an indispensable part of the new identity. settlers. and society. Few believe that the lack of pets was, in and of itself, the reason the Martian base failed during the Stranding. But that surely didn’t help.

The bond between the Moon’s larger and smaller primates persisted even when the rigors of separation came to an end. Almost all Cairders still don’t like spending a lot of time without the marmoset company. They hug them and savor their low gravity acrobatics. In a pleasant way that seems, on some level, not to be a joke, they treat the unusually long tails of Moon-born marmosets as a sign of providence, holding the tail fur to be especially good at picking up the moon dust. Dust, which can cause lung disease, infiltrates their habitats despite all airlock precautions; its removal is a constant battle. It’s questionable whether sucking it out of the tails that accumulate it like a feather duster is actually more efficient than the built-up electrostatic air filtration systems. But it’s clearly more therapeutic. And marmosets appreciate the attention.

The oldest born marmoset on Earth, New Mrs Chippy (who is, despite her name, a man) enjoys an honorary seat on the collective council. He has now reached the age of 31 with no obvious signs of aging other than skin almost as white as his ear tufts. This is considered a good omen for human longevity among the Cairders who refuse to accept a return to Earth. In Japan, on the other hand, lab marmosets rarely pass their 21st birthday.

The most prominent biological, as opposed to sociological, novelty among moon-born marmosets is a very high prevalence of blindness in adolescence. The constellation of vision problems known as “neuro-ocular syndrome associated with spaceflight” (WITHOUT) has been studied since the beginning of this century. In adult men WITHOUT develops normally only during long stays in the microgravity conditions of space stations; it is rare and gentle in humans on the Moon. But in marmosets born to low severity, it develops rapidly and severely at the onset of puberty and leads to almost complete loss of vision.

There is not yet an agreed explanation for this pathology. Some researchers believe this is not actually related to gravity but the result of an off-target effect of gene editing that realigned the calcium pathways used in bone growth, but it’s hard to reconcile this. with the similarity to WITHOUT as experienced by genotypic adult humans. Others believe its occurrence could be avoided if the newborn puppies were to spend more or all of their time in the simulated earth gravity of the centrifuge. But it turned out to be difficult to test this hypothesis. Infants who have spent any time in lunar gravity are very distressed by the rigors of the centrifuge and will not suck when placed in it. And the Cairders are unanimous in their opposition to anything that causes marmoset distress.

Blind marmosets are not badly off. Their siblings and human companions provide what little practical support they need. And they are happier than the showy marmosets to travel in the bags that many Cairders have incorporated into the suits they use to work on the lunar surface. Seeing marmosets are clearly disturbed by the harsh monochrome landscape, even when emotionally supported by the amplified sound of their mate’s heartbeat.

Sudden onset WITHOUT leaves the question of whether human children can be born and grow up on the Moon unanswered. It is sometimes suggested that a blind woman happy with the idea of ​​a child who might also be blind might choose to join the collective and explore the issue. But bringing a child to term would require a centrifuge capable of holding an adult human, rather than a 250-gram marmoset. The Cairders have no desire to devote resources to such a project, and their juche the ethics of self-sufficiency will not allow them to accept funding for such experiments from Earth. Thus, the ability of humans to reproduce on alien worlds remains unknown even today.

That they take pets with them, however, now seems certain. And some of these companions will surely have shockingly white ear tufts, odd little faces, and really long tails.■

Full content of this What if?
Freedom to tinker, October 2029: what if biohackers injected themselves with mRNA?
The other epidemic, June 2025: what if America tackles its opioid crisis?
Tale of two cities, June 2041: what if a deadly heat wave hits India?
You Are What You Eat, January 2035: What if everyone’s nutrition was personalized?
iHealthy, September 2028: What if smartphones became personal health assistants?
Blessing of Mrs. Chippy, February 2055: What if marmosets lived on the moon? *
New treatments, August 2050: What if dementia was preventable and treatable?
Rage against the machine, December 2036: what if an AI wins the Nobel Prize in medicine?
Germ of an idea: what if germ theory had gained ground earlier?

This article appeared in What if? section of the print edition under the title “The Blessing of Mrs. Chippy”