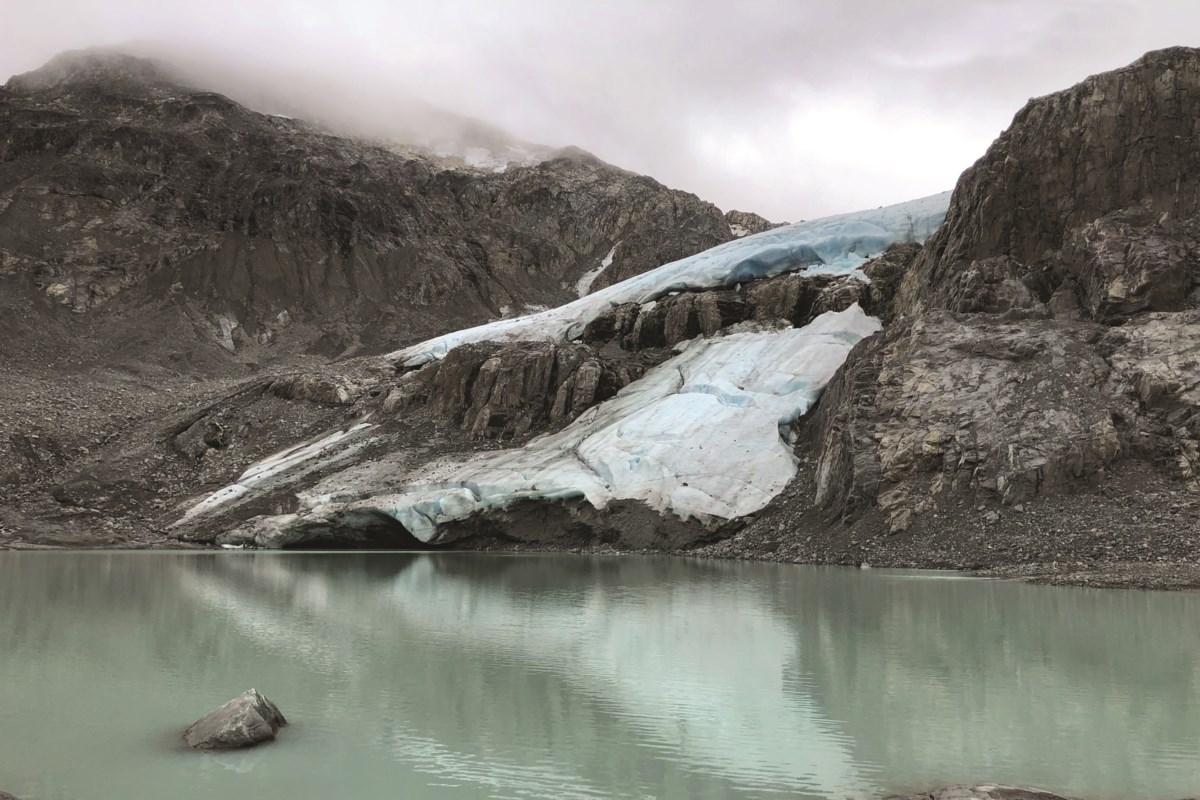 Kyle Graham has been looking forward to returning to Lake Wedgemount since his last visit in 2016. Typically he tries to hike the grueling trail every two years.

But when he made his way over the small ridge of boulders leading to the frozen blue lake to the Wedgemount Glacier at the end of last month, the scene was different from what Graham remembered.

Where the foot of a sprawling alpine glacier once bordered Tupper Lake – a second lake that began to form in 2013, in itself evidence of a receding glacier – instead stood a jagged rocky cliff partially covered in a thin patch of ice.

“I was almost completely speechless,” Graham said. “I just felt those heavy weights on my chest, realized how much things have changed in five years.”

This sentiment was shared by Dave Lyon and his son, Graeme, when the couple hiked up the Whistler Trail on Saturday September 11. They intended to join a crew that took a helicopter to the summit for annual glacier surveillance, but the cloudy weather eventually canceled the helicopter trip.

The father-son duo is an extension of the multigenerational glacier watch effort started by Karl Ricker and Bill Tupper in 1975, who were often joined by their good friend, Lyon’s father Don, for the annual counts.

Although the Lyonnais were unable to take any official action on their trip to Wedgemount on Saturday, they did manage to snap a few photos that clearly illustrate the sheer amount of ice that has melted since last September. When the same glacier was last monitored a year ago, researchers found it had retreated about 30 meters since the previous count in 2019.

But when the most recent measurements are calculated, the numbers will likely paint a much more dramatic picture of ice loss than in 2020 or other recent years, Lyon predicted. This is in part due to a significant portion of ice along the shore of Tupper Lake which, as Lyon observed, has now completely separated from the body of the glacier.

“So the recession this year will be marked where this rocky shelf is located,” Lyon explained. “I don’t even want to throw a number because I’m completely speculating on the distance going back [it’s receded,] but it is substantial.

Compared to the horizontal recession rate of recent years, “it must be quadruple or more, based on last year’s line,” Lyon said.

“And what is really shocking, if you talk to Karl [Ricker]-I mean, when they started this, this glacier was touching [Wedgemount] Lake.”

This accelerated glacial recession is not unique to Whistler, explained Michele Koppes, professor and glaciologist at the University of British Columbia (UBC). She and her fellow researchers have also observed higher rates of ice loss in the province’s glaciers, most notably on the Bridge Glacier along the Lillooet Icefield, as well as on the Helm Glacier in Whistler and the Place Glacier near Birken. The Geological Survey of Canada has been monitoring these latter two sites as indices of glacial melt in the region, measuring both glacier retreat and residual water flows since the 1970s.

“What we saw was that there was a constant setback in the ’80s and’ 90s and then from the early 2000s we just saw an accelerated setback,” Koppes said.

While she acknowledges that researchers are still awaiting this year’s final numbers as the melt season continues, it is “absolutely” possible to attribute the higher rate of melt to unprecedented temperatures the West Coast has experienced. earlier in the summer.

“Glaciers are a kind of climate reservoir,” Koppes said. By picturing B.C.’s glaciers as water towers, this summer’s series of heat waves has helped cut supplies to every reservoir, she explained: Who cleared all the snow in the surface of the glaciers, then it started to melt the ice.

Because the heat waves and the resulting melting events happened suddenly, new water channels also opened up beneath the glaciers, Koppes continued. “So the outlet streams have also been higher than ever before, and they’re kind of pulling water under the glaciers faster than before,” she said.

For example, when the Koppes team returned to the Lillooet Icefield this summer for the first time since their last visit in 2016, they found a glacier that “both retreated over a mile, this which is huge, and it has dropped 50, 60 meters, which is also a huge amount, ”she said.

Even more striking? In the decades from the 1970s to about 2012, the glacier receded about four kilometers in total, Koppes said. In the past nine years, it has already retreated by more than a kilometer.

Witnessing this loss of ice causes “a lot of heartache,” Koppes said.

“The heartache that these systems change so drastically and that we lose these beautiful places. And it’s just kind of a fear for the system – how humans, who are just one of millions of species on Earth, can have such a dramatic impact on these icy places. Places where we don’t really hang out. We don’t live there, but we can still have that effect on those places – dramatic effects – from our distant behaviors.

As BC’s ice continues to melt, the province could potentially see these dramatic effects spill over to communities downstream. The province currently relies on glacier runoff for purposes such as agricultural irrigation, hydropower, and regulating aquatic habitats with the cool, cool water they need.

Sticking to the water tower analogy, glaciers “store water in the winter and release it during the summer melt months, which is normally when we don’t have much. of precipitation and when we have a lot of forest fires. , “she explained.” As these glaciers shrink, they provide water earlier in the season… they are less reliable, and there [are] larger floods occurring and impacting infrastructure. The lost ice mass also means faster-flowing water sources, more erosion and more sediment in local waterways, Koppes added.

With a 2015 UBC study revealing that British Columbia and Alberta could lose about 70% of glacier ice by the end of the 21st century, “the most important thing to consider at this point is how we adapt to these changes. How do we create resilience in our infrastructure so that when we have more flooding and more sediment downstream, we can respond effectively? Koppes said.

“This is our own backyard”

Following Graham’s hike to Wedgemount Lake last August, the Whistlerite compared the photo he took that day to the one he took from the same angle five years ago. The glaring difference in the images prompted him to share the photos with the tens of thousands of members of the Whistler Summer Facebook group, sparking not only hundreds of reactions and comments, but also a conversation about what can be done for the better. protect the environment, as we think. with the local impacts of climate change.

“Our minds can interpret things a certain way, the way the world is changing, but getting a real perspective through a before and after photograph of what is changing in our own backyard can be really eye-opening. . Anytime I see a Greenland glacier before and after or something like that it always has an impact, but I feel like it’s a little more impactful when you see it in your own backyard. . That’s why I wanted to highlight it, ”Graham said.